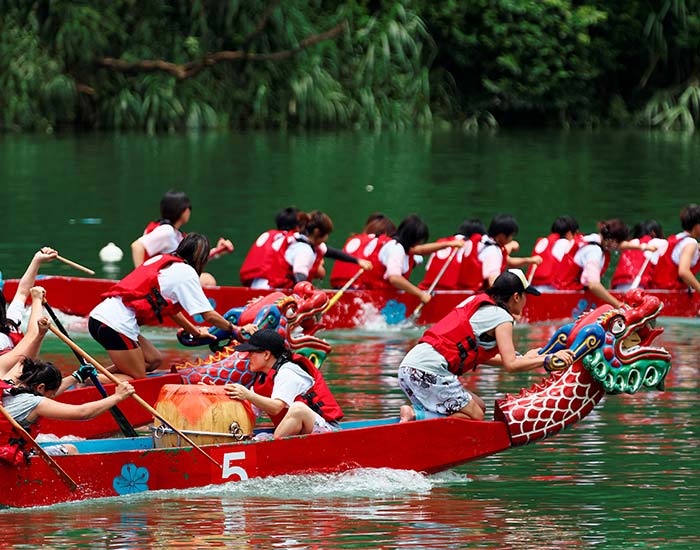 Dragon Boat racing is another fast and exciting flat water human-powered watercraft sport which is performed on a long boat with a face of a dragon at the head. The boat accommodates 10 or 20 players who paddle on the beat of a drum over a predefined distance.The sport has its roots from the east, where it was celebrated as a traditional sport in China, Malaysia, Indonesia and other eastern nations.

The objective is to race a dragon boat over a clearly defined unobstructed flat water path in the shortest possible time.

The events that are conducted in the Dragon Boat Racing are -

Get To Know Your Boat As Well As Your Team

Have a clear picture of the seating arrangement of the paddlers and the rest of the crew.

The dragon boat are not oared but paddled as only one side paddle is allowed in competitive dragon boat racing and should be paddled according to the rhythm of the drum beats.

There are many terms used in dragon boat racing. The team’s captain as well as the crew must be well versed with all such terms so as while instructing all of them should understand those jargons so as to make the team work efficiently.

A team constitutes of 10 or 20 paddlers according to the event i.e. either of 10 or 20 seater paddler boat race along with 4 and 2 substitutions respectively. The paddlers sit in pairs side-by-side anduse a single-bladed paddle. Both the classes have a drummer and a steerer with everyone in the boat paddling to the rhythm of the drum.

The drum beats produced by the drummer are termed as the "heartbeat" of the dragon boat racing. The drummer drives the paddlers throughout the race by using the rhythmic drum beat to symbolize the synchronicity and frequency of all the paddlers' strokes.

A 10 or 20 seater dragon canoe boat is used in the sport depending upon the format of the competiton with a dragon head on the front side of the boat. The paddlers stoke in the rhythm of the drummer with a one bladed paddle.

The boats are raced on flat water, free from obstacles at a predefined distance according to the event.

Decides on all the matters in the international level competitions.

Supervises the races and sees that the event has been followed without unnecessary delay.

Divides the crews and announces the race lanes.

Responsible for decisions as to wrong start. His decision is final and is not subject to appeal.

Brings the boat to the start without delay. Responsible for checking participants equipment, clothing, gears etc.

Supervises that the rules of the sport are adhered during the race. If broken, the Umpire shall report immediately the infraction to the Competition Committee

Responsible for recording the times.

They assist the Technical Organiser before the commencement of the competition to test the boats taking part in the races are according to the norms laid down by the ICF.

His duty is to supply all relevant and necessary information to the press, radio and television representative about the races and its progress.

The objective is to race a dragon boat over a clearly defined unobstructed flat water path in the shortest possible time.