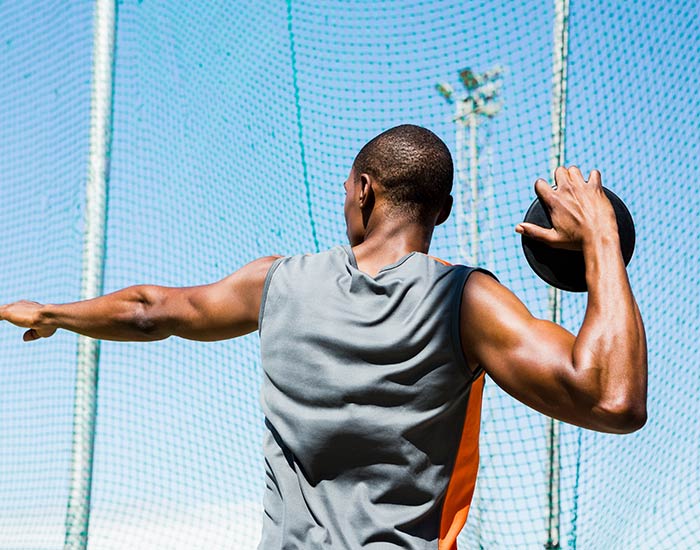 Discus Throw is a track and field (throwing) athletics event in which athletes throw a heavy disc known as a "discus" as far as possible to win the competition. It is one of the ancient sports that was demonstrated by the fifth-century BC artist  Myron in his statue ‘Discobolus’. This sport was played as one of the events in the Ancient Greek pentathlon in 708 BC. In modern sports, it was previously part of the ‘Pentathlon’ but it is now a part of modern ‘Decathlon’.

The sport of discus throwing as event took place in the Ancient Greece. The Discus as a sport was revived in Magdeburg, Germany by a gymnastics teacher Christian Georg Kohlrausch and his students in the 1870s. The Men’s Competition started in the late 19th century, and has been a part of the modern Summer Olympics Games since the first modern competition i.e. the 1896 Summer Olympics.

The first modern athlete to throw the discus while rotating the whole body was Frantisek Janda Suk from Bohemia (the present Czech Republic). He had invented this technique after studying the position of the famous statue of Discobolus. After one year of developing the technique he earned a silver medal in the 1900 Olympics.

Women’s competition began at the beginning of the 20th century. It was later added to the Olympic program for the 1928 games.

The participants try to throw the discus as far as possible and amongst them who throws it farthest is declared as the winner.

The two variations in the event that have been contested at the Olympics are a two-handed competition that took place at the 1912 Stockholm Olympics in which the athletes used both their left and right arm putting techniques, and a stone throw at the 1906 Intercalated Games, Athens, Greece.

Usually, the Discus Disc sides are made of plastic, wood, fiberglass, carbon fiber or metal with a metal rim in the boundary and a metal core to attain the weight. The more rim weight, the greater the angular momentum that increases the stability and distance. According to the International Association of Athletics Federations (“IAAF”) the weight of the discus for Men should be 2kg (70.54 oz.) with 22 cm in diameter and for Women it should be 1kg (35.27 oz.) with 18 cm (6 inch) in diameter.

The Discus Shoes are made of leather or suede with smooth and flexible soles. Cleats are not present over the outer sole.

To have a perfect throw, the athlete has to start throwing from a throwing circle of 2.5 m (8 ft. 2 ¼ in.) in diameter, which is made up of concrete or some non-slippery material. The throwing circle is enclosed with a rim of 6 mm thickness and a depth of  70 to 80 mm.

The U-shaped cage is to protect the viewers. It is designed, manufactured and maintained so that it is capable of stopping a 2kg discus moving at speeds of up to 25 m per second. The netting of suitable natural or synthetic fiber cord or of mild or high tensile steel wire should be used.  The mouth has a width of 6 m and a height of 4 m.  The mouth of the cage is positioned 7 m in front of the center of the throwing circle.

As we know that Discus throw requires high physical strength and also good body balance while throwing the discus.

The athlete has to place the hand flat on the discus such that it is held with the fingers spread slightly and thumb used for balance.

In a swinging or rhythmic action, the athlete moves the discus back and forth in motion to gain momentum with his shoulders, arms relaxed and concentrates deeply.

During a one and a half turn rotation, the athlete’s body accumulates as much energy as possible and he / she pushes powerfully off the left leg (If right-handed), while the left arm acts as a counter-weight along the axis of the shoulders.

Up to the last moment, the trunk and arms are extended with the hips, legs and feet in motion.

Using the right leg as lever the athlete quickly straightens the body and thus the discus is thrown in an explosive motion with the arms moving around.

There must be at least six judges / officials, three operating at the circle and three in the field. The responsibilities of the judges include - watching their assigned area so that each rule must be followed, record all attempts made by the competitors and verify the results at the end of each round.

Athletes are given 90 seconds to make a throw. Each athlete is given three attempts and the winner is the one who has made the longest throw without stepping outside of the throwing circle before the discus touches the ground.