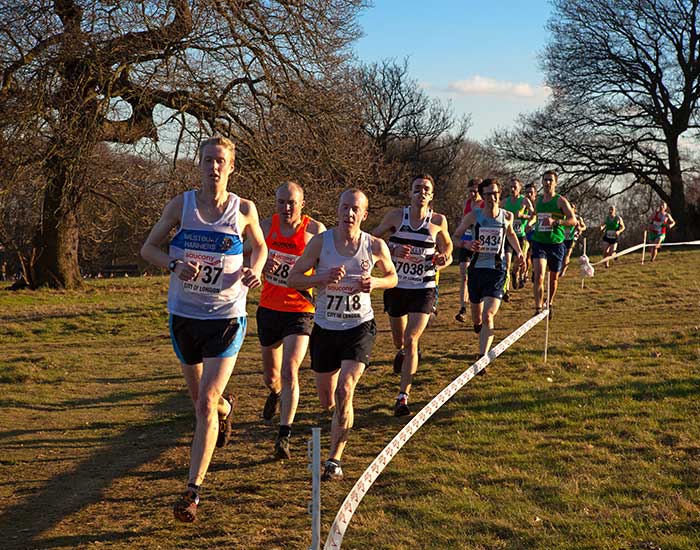 Cross-country running is an athletics event in which athletes run in open-air courses over natural terrains such as grass or dirt as a part of a team as well as individually. The course typically ranges from 4-12 km in length including the surfaces of grass and include hills, flat ground and some gravel road. These races usually take place during winters and autumn and include weather conditions like rain, snow, etc.

The formal cross country competition has its roots connected to the 19th century English game called “Hare and Hounds” or “The Paper Chase”. In 1837, English schools started competing in cross country races. On 7 December 1867, a national championship was established. It was held on Wimbledon Common (A large open space in Wimbledon) in southwest London. This was the first cross country race that was considered “open”, or could be run by anyone and the race was about 3.5 miles long through a very boggy and hilly terrain.

The first national competition of cross-country run took place in England in 1876 and the first International Cross-country Championships was held in 1903 at Hamilton Park Racecourse in Scotland. The IAAF World Cross Country Championships started taking place since 1973 in the Belgian town of Waregem and is now held every two years. The men’s cross country races have also taken place in Summer Olympics in 1912, 1920 and 1924.

A course may include natural or artificial obstacles but in case of a cross country course it consists of continuous running, and do not require climbing over high barriers, through deep ditches or fighting through the underbrush as involved in assault courses.(An assault course is a trail that combines running and exercising)

The race course consists of clear markings that keep competitors from making wrong turns and spectators from interfering in the competition. The markings may include tape or ribbon on both sides of the course, chalk or paint on the ground, or cones. Moreover, sometimes colored flags are used to indicate directions such as the red flags for left turns, yellow for right turns and blue flags to continue straight or stay within ten feet of the flag. These courses even include distance markings, usually present at each kilometer or each mile.

Shoes with a maximum of 11 rubber cleats are used by athletes that offer a good grip on muddy and grassy routes.

Loose fitted, lightweight shorts are worn by athletes that are made of breathable fiber and provide excellent body movement.

Responsible for deciding the order in which the athletes finish by recording their finish timing and the bib number.

At the start, the members of each team should be lined up behind each other.

The Starter is the person responsible for starting the race by giving commands like “on your marks” and “set,” for firing the start gun and also responsible for making disqualifications and warnings.

The Timekeeper is responsible for recording the times of the athletes.

The number of competitors varies between 100 and more than 35,000. The Finishing order and the scores are determined by summing up the top four or five individual finishing positions of each team. In international events, a team consists of six athletes with the top four scoring.  If points of two or more teams are tied, then the position of each team’s sixth runner decides the winner.

If an athlete shortens the distance to be covered while going off the marked course, he / she would be disqualified.

Players – Listed in the Golden Book

The three players who have marked themselves in the golden book of Cross Country are:

Kenenisa Bekele of Ethiopia, Eat Africa has won 16 gold medals at the IAAF World Cross Country Championships, 12 individual and four team wins. He has achieved double victories from 2002 to 2006 in the long course and has now discontinued short course races.

Paul Tergat of Kenya became the first man to win five consecutive world cross-country titles from 1995 to 1999. His most impressive and memorable win was in 1996 in Cape Town where he won by 12 seconds after going through 10 km.

Grete Waitz was a Norwegian who won the IAAF World Cross Country Championships five times. She had won more international fame as a marathon runner than Cross Country.