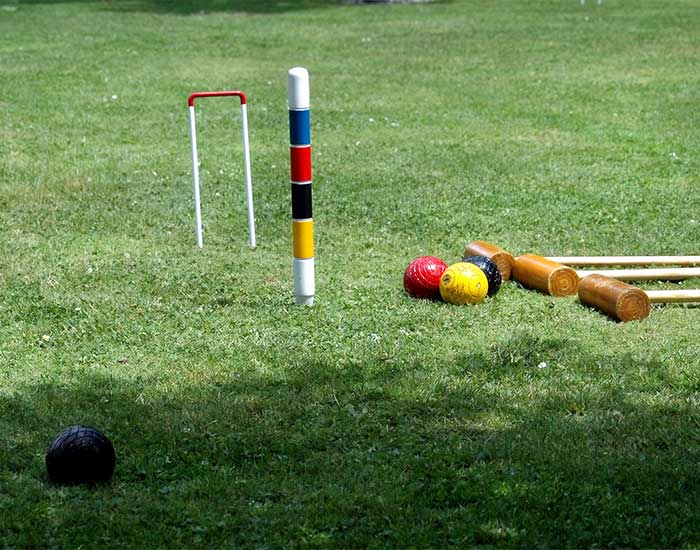 Croquet is a mind sport which involves hitting wooden or plastic balls with a mallet through hoops (also known as wickets in the US) embedded in the grass playing area, which is usually a well-manicured lawn approx. the size of two tennis courts. The game is basically played by two sides, made up of either single players or two teams of two players. Each of the sides has two balls: one blue and black, the other red and yellow which must pass through six hoops twice in the correct order and direction, and then hit the central peg. The winner is the first player/team to hit a centrally located pole.

The sport is believed to be originated in Ireland in the 1830s, later spreading to Great Britain where it quickly grew in popularity and was included in the 1900 Summer Olympics.

Croquet is a tactical game in which players can sabotage their opponent's position while completing the course. There are many variants of the sport in which association croquet and golf croquet are most popular and are played in many countries around the world.

Players wear comfortable shirts and trousers/shorts or skirts (for girls) that must be white in color.

Shoes with smooth flat soles are worn by players that must not damage the playing surface.

The stick used to play the game is called mallet which can be of any length and has a hammer head that is used to hit the ball.

Wooden or plastic balls in four sets of colors are used in croquet. The ball weighs around 453 grams and has a diameter of 9.2 cm.

Wire wickets or hoops are used in croquet and are embedded in the grass court. The balls must be struck through them. The hoops are typically 30 cm long and 9.5 cm wide.

The peg is the winning post which is fixed in the center of the lawn. It is usually 46 cm long and has a diameter of 4cm. It has colored bands around its circumference.