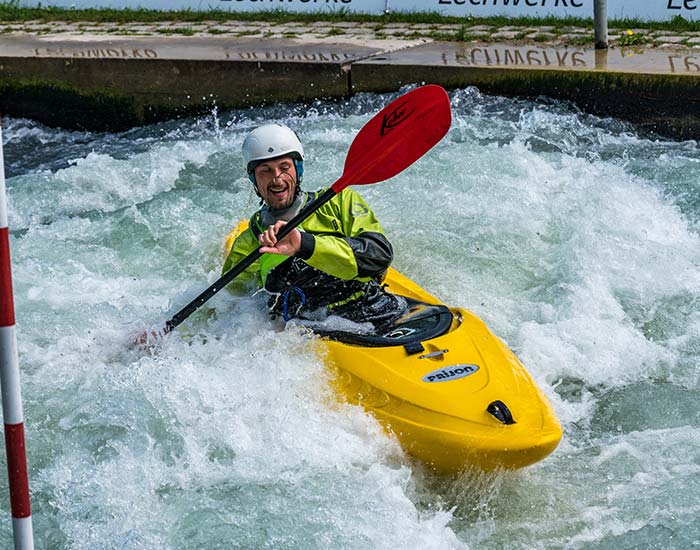 Whitewater Canoe Slalom is a competitive sport governed by the International Canoe Federation. It is performed with the motive to travel a canoe or kayak through a course of hanging upstream or downstream gates on river rapids in the fastest time possible. The discipline is also the part of the Summer Olympics and is referred as the Canoe/Kayak Slalom by the International Olympic Committee (IOC). Whitewater slalom racing emerged in Europe in the early 1900s, whereas, the first World Championships were held in 1949 in Switzerland.

The participants take part individually and compete against each other.

The paddlers wear helmets to protect themselves against injury.

It is a lightweight foam-filled personal flotation device (PFD) used by paddlers that help in flotation after capsize.

Each gate consists of two poles that are hanged from a wire strung across the river. A total of 18 to 25 numbered gates are there in a course, out of which 6-7 must be upstream gates, colored as either green (downstream) or red (upstream) that shows the direction to be negotiated. The upstream gates are always located in eddies, where the river is flat or moving slightly upstream;the paddler begins an eddy from the main current and paddles upstream through the gate. Downstream gates can also be placed in eddies, to increase the difficulty, and downstream gates in the current can be an offset to the alternating sides of the current that needs rapid turns in the fast-moving water.

He is the person in charge of the team all through the whole of the contest.