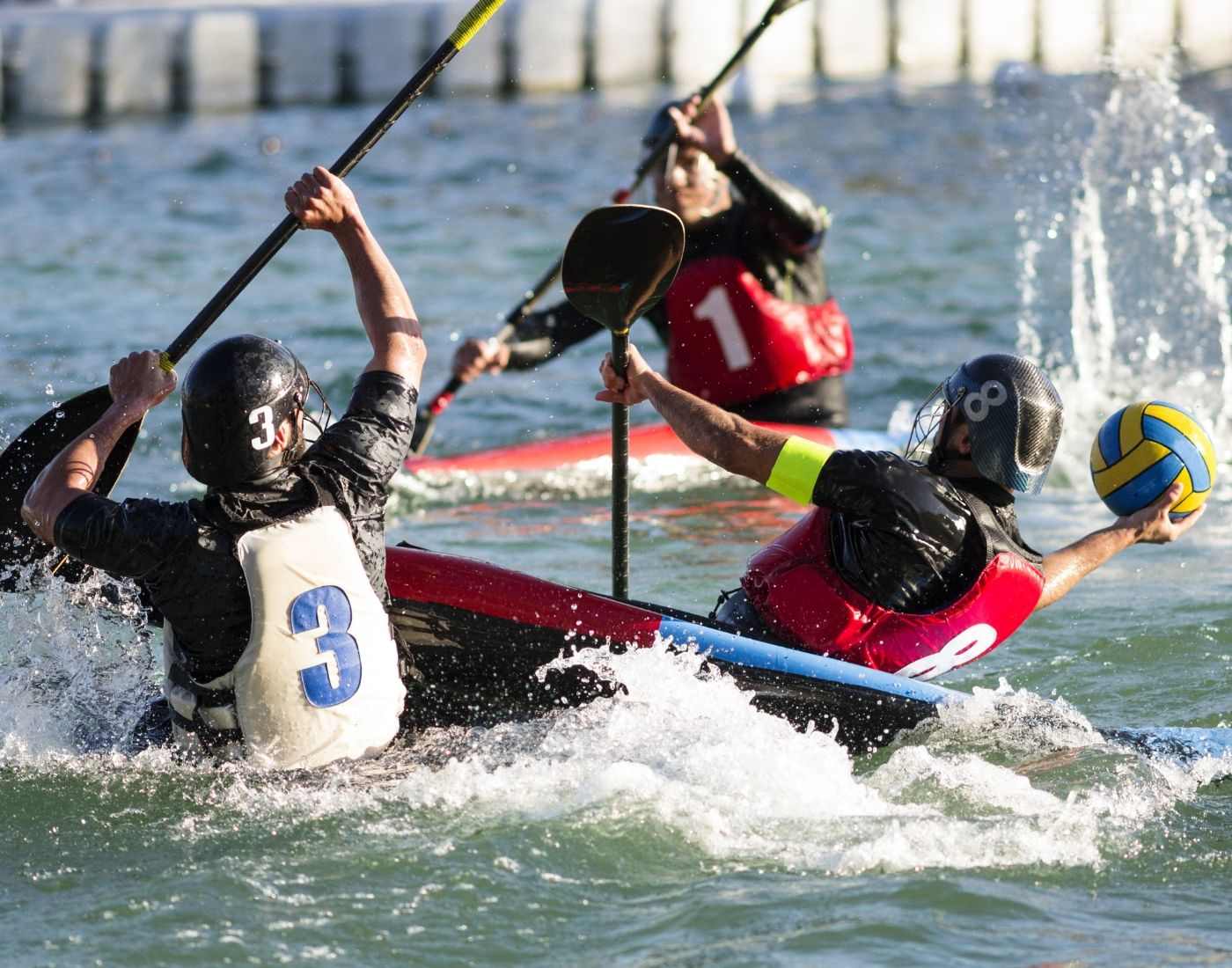 Canoe Polo is a competitive sport played on canoes or kayaks by two teams each of five players each. It is played on a rectangular pitch that can be open water or a swimming pool and requires great strength and teamwork. The ball used in canoe polo is the same that is used in water polo and is controlled by a hand or a paddle.

The canoe ball games have been played since the beginning of the 19th Century in many parts of Great Britain, and its early forms are said to have been played in the United States and Europe as well. The first national championships of the sport was held in England, but the International Canoe Federation (ICF) published its first set of rules of the discipline in 1986 after which the sport was demonstrated at the canoe world championships in Duisburg Germany.

The aim of both the teams is to outscore their opponent.

The two types of events that take place are - Men's Events and Women's Events.

Players wear buoyancy aid to protect themselves from the injuries. These aids must be equipped with an inch of foam on the front, back and sides of the player.

A spray deck is used to guard the cockpit of the kayak and prevent water from filling the kayak during play.

The goals used in the sport of canoe polo are the frames that measure 1 m long by 1.5 m wide and are attached with a net. The goals are suspended 2 meters above the water.

The players wear helmets and face-guards to protect their head and face from injury caused by the contact from paddles or other kayaks.

The canoe polo ball is same as to the one used in water polo and is made of a buoyant material which allows it to float on the water. Different size ball is used in men's, women's and juniors competition.

The match is played between two teams of five players each side that must be present on the playing area at any given time of the play. Three substitutions are allowed in the game which can be availed anytime.

The match is played on a rectangular pitch which can either be on the open water or a swimming pool which should measure 35 metres in length and 23 metres in width. The water should be still water which must be at least 90 cm deep. A goal post must be located over the center of each goal line.

A team obtains a goal when the whole of the ball passes through the goal frame of the opponent’s goal. The referee will show the number of the player scoring the goal to the scorekeeper. Time-out must be there after a goal is scored. If the ball is prevented from entering a goal by either a defender's or substitutes paddle that enters the goal from behind, then a goal is awarded.

After a goal is scored, the scoring team must return to their own half in within 10-15 seconds. Any intentional delay will be sanctioned with a Team Warning for Unsporting Behavior for Deliberate Delaying Tactics Signals. The referee may restart play as soon as the attacking team is ready even if up to 2 players of the defending team are not back in their own half.

The match consists of two referees (one on each side-line) who are present on foot rather than in boats.

The timekeeper observes the playing time and sending-off times.

The aim of both the teams is to outscore their opponent.