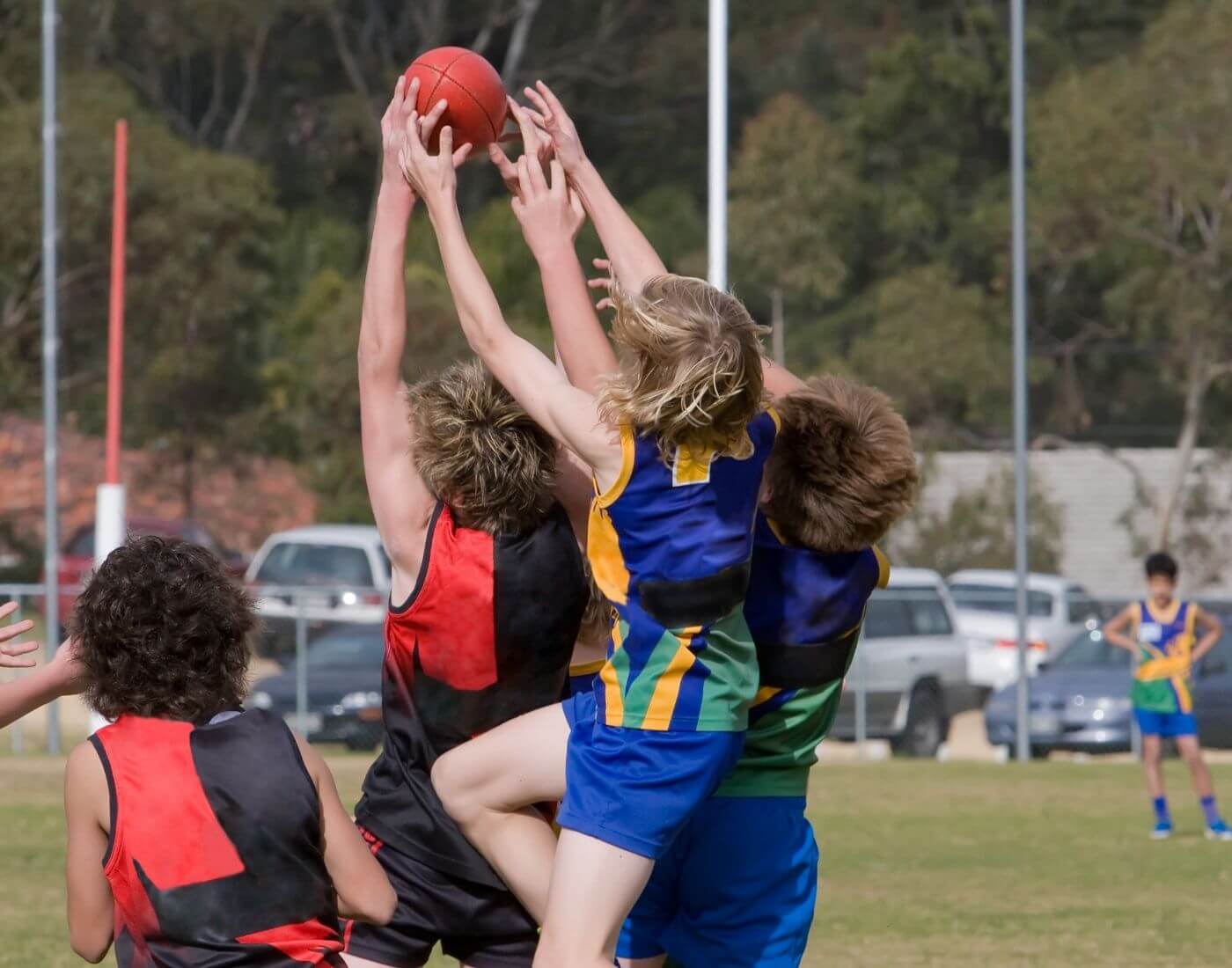 Fondly known as Aussie Rules or Footy, Australian Rules football is a contact sport played between two teams consisting of 18 players each side on an oval-shaped ground. The objective of a team is to win the game by scoring more points via more number of goals than the opponent.

The main difference between Association and Australian football is that the latter is played with an oval-shaped ball and the ball can be touched with any part of the body in order to move the same. The sport was originated in Melbourne, Victoria in 1858 in English Public School of Football Games.

Aussie Rules was formed keeping in mind with the conditions more suited to the adults of the nation. The rules of the game were published by the Melbourne Football Club in May 1859, making it the oldest of the world’s football sports codes. Australian football is played at an amateur level in many countries with a number of variations. The highest governing body of the sport is AFL Commission.

Australian rules football was originated in Melbourne, Australia, in 1858. The main match distinguished as an antecedent to Australian Football was composed and umpired by Tom Wills and was played on 31st July between Melbourne Grammar School and Scotch College, adjoining the Melbourne Cricket Ground at the Richmond Paddock. The oldest surviving set of standards of Australian Rules Football were drawn up on 17th May 1859, three days after the development of the Melbourne Football Club.

The starting points of Australian Football before 1858 are as yet the subject of much discussion, as there were a large number of football match-ups in Britain, Ireland and Australia whose rules affected the early football match-ups played in Melbourne. Groups would need to concur before each match regarding which guidelines would be pursued, and distinctive parts of affiliation football, Gaelic football, rugby football, Sheffield rules, Cambridge rules, Winchester College football and Harrow football were evident in the early contests of the sport.

During the 1990s, the VFL turned into the Australian Football League, a national body and the head group in Australia that later on turned into the accepted global governing body for the game.

Auskick is a program intended to show the fundamental abilities of Australian Rules Football (AFL) to young children of age between 5 to 12 years old. It is known by various names in a few nations, for example, Kiwikick in New Zealand and Footywild in South Africa.

Kick-to-kick is a hobby and a well-followed custom of Australian Rules Football fans, and a perceived Australian expression for kick-and-catch type recreations. In its "markers up" structure, it is the standard easygoing variant of Australian principles (like the connection between lobby/beach cricket and the built-up types of cricket). Kick-to-kick is utilised as a warm-up exercise of numerous Australian rules football clubs and has been the beginnings of multiple clubs.

9-a-side football is a game dependent on Australian Rules Football played casually by Aussie Rules clubs yet not yet an official sport in its very own right. 9-a-side diversions are now and then played on half-size fields that are regularly rectangular or normal rugby fields, with nine players on the field at a time, commonly comprising of 3 forwards, three backs and three centres players. Regularly two games  /match-ups are played in the meantime on a solitary Australian Rules or cricket pitch. On different occasions, 9-a-side makes utilisation of the full space of the field when a complete supplement of players isn't accessible. This assortment is an increasingly open and running variant of Australian rules.

Masters Australian Football (otherwise called "Superules") is a game dependent on Australian rules football for players matured 35 years and over. Adjustments to the principles lessen the physical effect of the game for more seasoned players. More than 119 teams play it all through Australia and around the globe. The variety to the game is likewise named "Superfools" by a few devotees and players.

Metro Footy (or Metro Rules Footy) is a different adaptation of Australian rules football rules played on gridiron football, rugby or Association football fields, dominatingly in the United States of America. Groups regularly play the 9-a-side game on a 110 x 50-meter field. The groups that play feed into more significant 18-a-side Australian rules representative teams that partake in leagues, for example, the MAAFL or competitions, for example, the USAFL National Championships and furthermore give the chance to acquaint new American players with the round of Australian rules football.

Samoa Rules is a type of sport gotten from Australian rules football that has likewise been played in Samoa. The diversion is played on rugby fields, and each team comprises of 15 players for each side.

In contrast to Australian rules football, player movement is limited to zones (comparatively to Rec Footy).

Another noticeable variety of the game is AFLX, an official Australian Football League authorised pre-season occasion. The sport is played on soccer-sized pitches and highlights seven players on a side, just as a few different principles intended to accelerate the matches.

The sport is played between two teams of 18 players each along with four interchanges. The players can place themselves at any position on the ground and can use any part of the body to move the ball.

There are four goal posts at each end of the ground; two middle (which are taller) and two outer (which are shorter in length) ones. Kicking the ball between the posts helps the attacking team to score the goal.

The Sherrin brand's football is considered as the official Australian Football League game ball. The football balls have a symmetrical oval shape with a circumference ranging from 720 to 730 mm and 545 to 555 mm transverse circumference. The ball is further inflated to a pressure of 62 to 76 Kpa.

They use lightweight and comfortable shoes with studded or cleated soles.

Players wear light and durable shorts usually made of polyester that allows good freedom of movement.

The most important individual skill in the sport is kicking. The basic skills must be taught at a very young age as it is very important for the players to learn the right kicking techniques at an early age because rectification is quick and easy as compared to late years of training. It will, later on, showcase the ability to:

Torpedo, banana and snap kicks are few of the specialized kicks out of many that are used in Australian football.

Handball is one of the most important skills of the game. Previously, the players were generally told not to handball while defending and use it in the case of emergency only. Today, handball is the most attacking tool in the game as the players run the ball from the defence to offense. The drill needs to be practised regularly in order to master it. the main rules are as follows-

The ruck of ruck player is very important in the game. A good ruck sets up the play from many different ways such as the boundary throw-in or bounce. It is important for the ruck to have the skill and ability to deliver the ball to his teammate's best advantage so as to create opportunities for his team's smaller, running players. The techniques required to move the ball towards the goal or to get the ball to teammates from a ball-up or boundary throw-in.

The points to learn are:-

One of the spectacular features of the Aussie Rules Football is the high mark. Like all the other drills, marking is also needed to be practised a lot as you never know there can always be a situation in the play where you are in the position to mark the ball.

The professional matches are divided into four quarters of 20 minutes each. The time is paused each time a score (goal) has been made or the ball is out of the bounds or at the discretion of the umpire. The time resumes when the umpire signals for time-on or when the ball is brought into play. Five to six minutes of break is allowed before the start of the second and fourth quarter, and a twenty-minute half-time is allowed before the beginning of the second half.

Umpire is responsible to fulfil the following duties-

A goal worth six points is said to be scored when the football is passed by the opponent team through the goal posts of the other team’s end at any height of the poles.

The team who has scored the most number of points at the end of the game time is declared as the winner, and if the scores of both the teams are equal, the game is a draw. Extra time is awarded only in the final matches in some competitions.