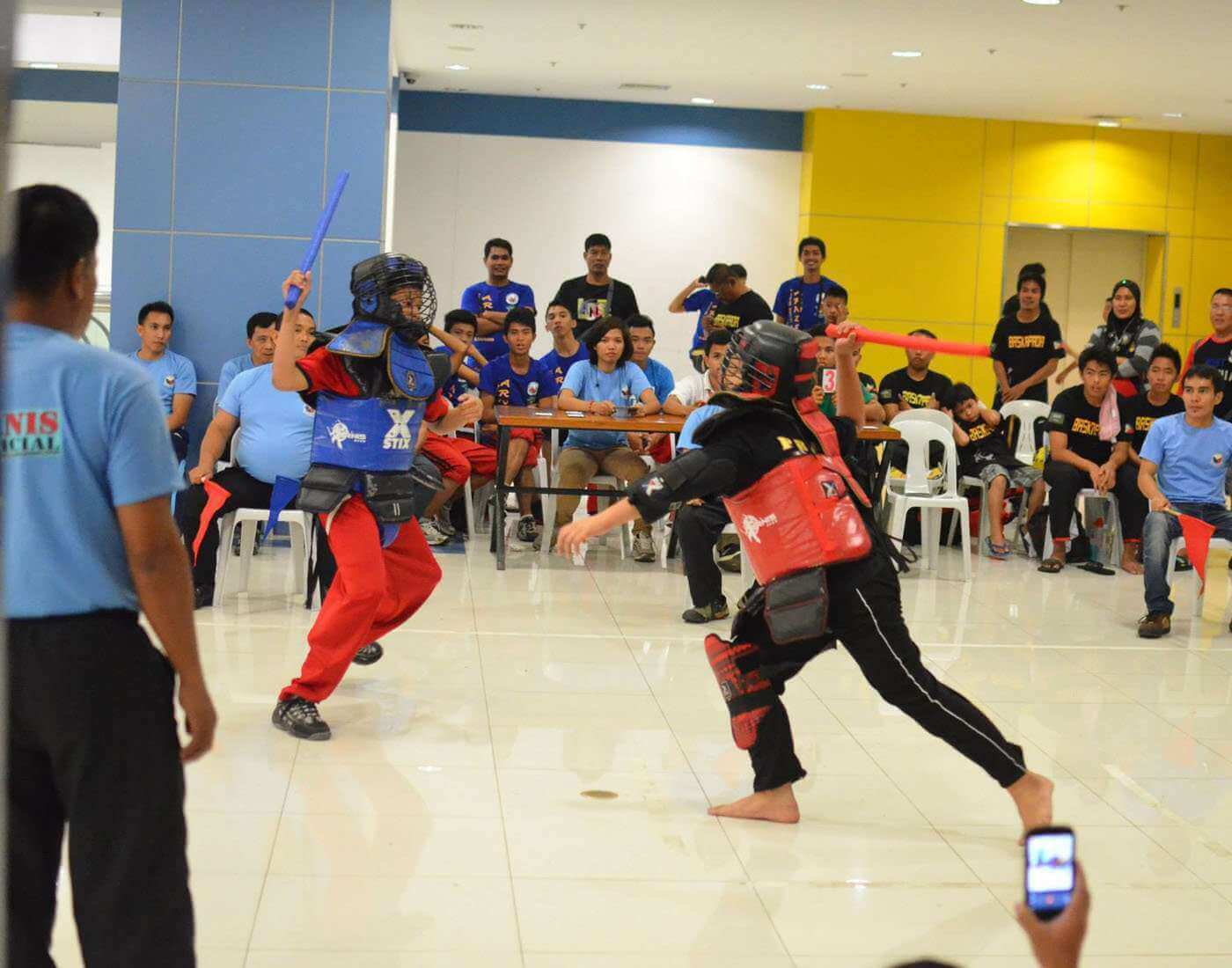 Arnis is the official national sport and the martial art of the Philippines. It is also known as "Kali" or "Eskrima". These two terms are used for the traditional martial art of the Philippines (“Filipino Martial Arts”, or “FMA”) that focuses on weapon-based fighting with knives, sticks, bladed weapons and some improvised weapons. Arnis is a combat sport to defend oneself from attacks using hand to hand combat, grappling and weapon disarming in weapon-based fights.

Origin of the Name

The word Arnis got originated from the old Spanish term, arnés, meant “armor”and Eskrima is a Filipinization of the Spanish word, esgrima for fencing. Whereas the name ‘Kali’ was derived from the pre-Hispanic Filipano term ‘Kalis’ which meant Blades and Fencing.
Practitioners of the sport are called “arnisador” for male and “arnisadora” for female in Arnis and “eskrimador” for male and “eskrimadora” for female in the Eskrima and Kali Art.
Moreover, all the three, Arnis, Eskrima and Kali belong to the same family of Filipino weapon-based martial arts and fighting systems.

Philippine is an island nation that is not only rich in culture, heritage, and history but also in sports. The Filipino martial art widely known as Arnis / Kali / Eskrima has contributed to both the history and diversity of Philippines.

Some common questions that arise in every reader’s mind are (a) “Where did this Sport Originate From?” (b) “Why is it played?”  Therefore, to get a better understanding about the sport we need to dig into the past.

Initially, the sport was practiced by peasants or by commoner class people.  But these practitioners lacked the scholarly knowledge due to which this sport has no written records. The origin of Arnis can be traced back to native fighting techniques during the conflicts among the various Pre-Hispanic Filipino tribes or kingdoms. Whereas, another form of Spanish fencing dating back to the 15th Century, also influenced the current form of Arnis, moreover it also has the impact of Chinese, Arab and Indian martial arts.

It is also believed by some people of Philippines that the Filipino art of Arnis has some roots connected to India as the people who traveled through Indonesia and Malaysia to the Philippine islands had brought this art with them. Silambam, a stick based ancient martial art of Tamil Nadu, India, has influenced many martial art forms in Asia like Silat among which it is also believed that the Filipino Martial art sport, Arnis, also shares ancestry with India’s Martial art, Silambam, as it has some similar moves with the short stick (kali or kaji) and other weapon based styles of Silambam.

Arnis originally belonged to the people of Philippines, but as time passed by, the art spread over to other countries and by the time of World War II; many continents adopted it. Arnis also played a significant role during the Philippine revolutionaries against the Spaniards.

Eventually, it was the Filipinos who provided the art with a systematic structure. It was brought to Hawaii and California in the 1920s. The teaching was kept within the Filipino communities until the 1960s after which Master Angel Cabales and others began teaching it to others. It took almost two decades to make the art known to all around the world and in January 2010; it was officially recognized as the National Martial Art and Sport of the Philippines.

Depending upon the use of weapons and sticks; Arnis is differentiated into two styles: the Classic Arnis that is all about the use of blades and weapons whereas the Modern Arnis deals with the art of sticks and everyday objects. The Modern Arnis is the system of the Filipino fighting arts founded by Remy Presas as a self-defense system. His goal was to create an injury-free training method as well as an effective self-defense system to carry forward the older Arnis systems.

Arnis was declared as the Philippines’ National sport and martial art on 11 December 2009. The first national organization for Arnis is the National Arnis Association of the Philippines (NARAPHIL) which was founded in 1975 by Gen. Fabian C. Ver.

However, its existence faded post the Philippine Revolution in 1986. The two major types of Arnis practiced as sports are the system followed by WEKAF (World Eskrima Kali Arnis Federation) which was established in 1989, and is recognized internationally; and the other system followed by Arnis Philippines (ARPI), established in 1986, which was used prominently during the 2005 Southeast Asian Games.

WEKAF is the most common system of Arnis art which is used internationally. It was established in 1989.  The system works on the 10-point ‘must’ system that is quite similar to boxing. Here, the participants spar with live sticks wearing a long padded vest, skirts and sleeves. In this system, hitting below the thigh is strictly prohibited. This system emphasizes heavy offence at the expense of defensive techniques, and the combatants are seen hitting each other in a disorganized manner. Hence, the "four-second rule" according to which the participants were forbidden to use the same strike for more than twice in succession. This system is preferred by participants who want to test themselves.

The Arnis Philippines system was established before the WEKAF system (in 1986) and adapted the scoring system similar to fencing. The matches are observed by multiple judges to mark fouls and the loudness of the impact judges the strike strength. The participants score points by disarming their opponent or by forcing them to step out of the ring. In the ‘ARPI’ system, participants use padded sticks with light rattan cores (wooden stem) in place of live sticks as they are tenderer and flex while attacking.

The sport Arnis is played between two fighters with a main objective of earning more points by legally attacking the opponent with the help of stick. It is said that Arnis develops self-discipline and control because this sport is a simple martial art and it is all about defending oneself by using sticks.

Arnis / Kali / Eskrima are all part of the same art depending on the location, dialect and type of training. The one interpretation common to all of them is that Kali is the mother art of Arnis and Eskrima. Moreover, Arnis focuses on the knife, including the dagger, sword, and any other form of bladed weapon whereas Eskrima is based on the ‘baston’ or stick. Therefore, the equipment used in Arnis is:

Baston: This is the most basic and common weapon in Arnis. Traditional common materials used for wooden bastons are usually rattan, kamagong, and bahi wood. It is also available in modern materials such as fiberglass and plastics and in metals like aluminum.

Rattan: This is usually constructed from a stem of Southeast Asian vine. This stem is hard and durable yet lightweight that makes the weapon useful for defense against blades. At present, fighters use padded Bastons. The Baston (Baton) is about 28 inches (71 cm) in length.
Kamagong (also known as Mabolo): This is a dark, dense, expensive type of wood known for its hardness and weight. Kamagong is also an endangered species of ebony wood.
Bahi: Bahi is a type of wood made from the heart of a palm tree. It is similar to kamagong but is made of a porous material in weight and density.

3) Head Gear: It is a necessity in Arnis combat. It is covered with high-grade leatherette and vinyl that is printed with ethnic art. Its materials provide vital protection from head strikes and a multi-thickness metal frame is developed for impact protection.

4) Body Armor: It is designed specially to provide complete upper body protection while allowing mobility and protection. The armor is usually made of hard plastic and vinyl for lightness and the lower panels are extended downwards to provide extra coverage.

5) Leg Guard: These guards can be used to protect both thigh and the shin area and are not only designed for protection but also for comfort and practicality.

6) Groin: It is a special padding for the lower abdomen. It has a groin cup to provide complete protection to the groin area.

7) Hand Gloves: It is a thick rubber protection which serves as a protection from strikes as the stick is held in hand. Its open palm design ensures a stable grip and finger flexibility for impact absorption.

8) Arnis Clothing: The basic Arnis Uniform is made from twill fabric, which maintains durability and comfort. It is specially designed after the classic Arnis uniform with Velcro straps to close the flaps easily.

The playing area is a square measuring 26.24 feet (8 meters) on one side with 6.56 feet (2 meters) of minimum free zone drawn outside it. All the lines of the playing surface are 1.97 inch (5.08 cm) in width and four lines mark the boundary of the playing area. The two lines of 3.28 feet (1 meter) long and 6.56 feet (2 meters) aside mark the horizontal match line. When the horizontal match line runs perpendicular to the official’s table it is drawn 9.84 feet (3 meters) from the boundary lines whereas 11.48 feet (3.5 meters) from the boundary line if drawn parallel to the official’s table.

While playing this sport, the two fighters need to be fully equipped with the protective gears and are allowed to hit their opponents only above their thighs in two round matches at one minute per round with thirty seconds of rest between rounds. Arnis has a four second rule that restricts the participants from making the same strike more than twice in succession. Moreover, if a rule is broken then the officials give a warning sign before disqualification. At the end of the game the fighter with highest points wins.

All matches are scored by 3 judges on the “10 Point must” system. Scoring is based on Quantity of strikes, Effectiveness of Strikes and Ring Generalship (time spent staying within the ring). In single stick competition, disarms shall be scored as part of the match as a mandatory point deduction and if 3 disarms take place this would result in a Technical Knockout (“TKO”) whereas in double stick competition, a fighter point will not be deducted if disarmed and will continue to fight with one weapon until the end of the round. If a fighter loses both the weapons, then he / she will automatically lose the match.