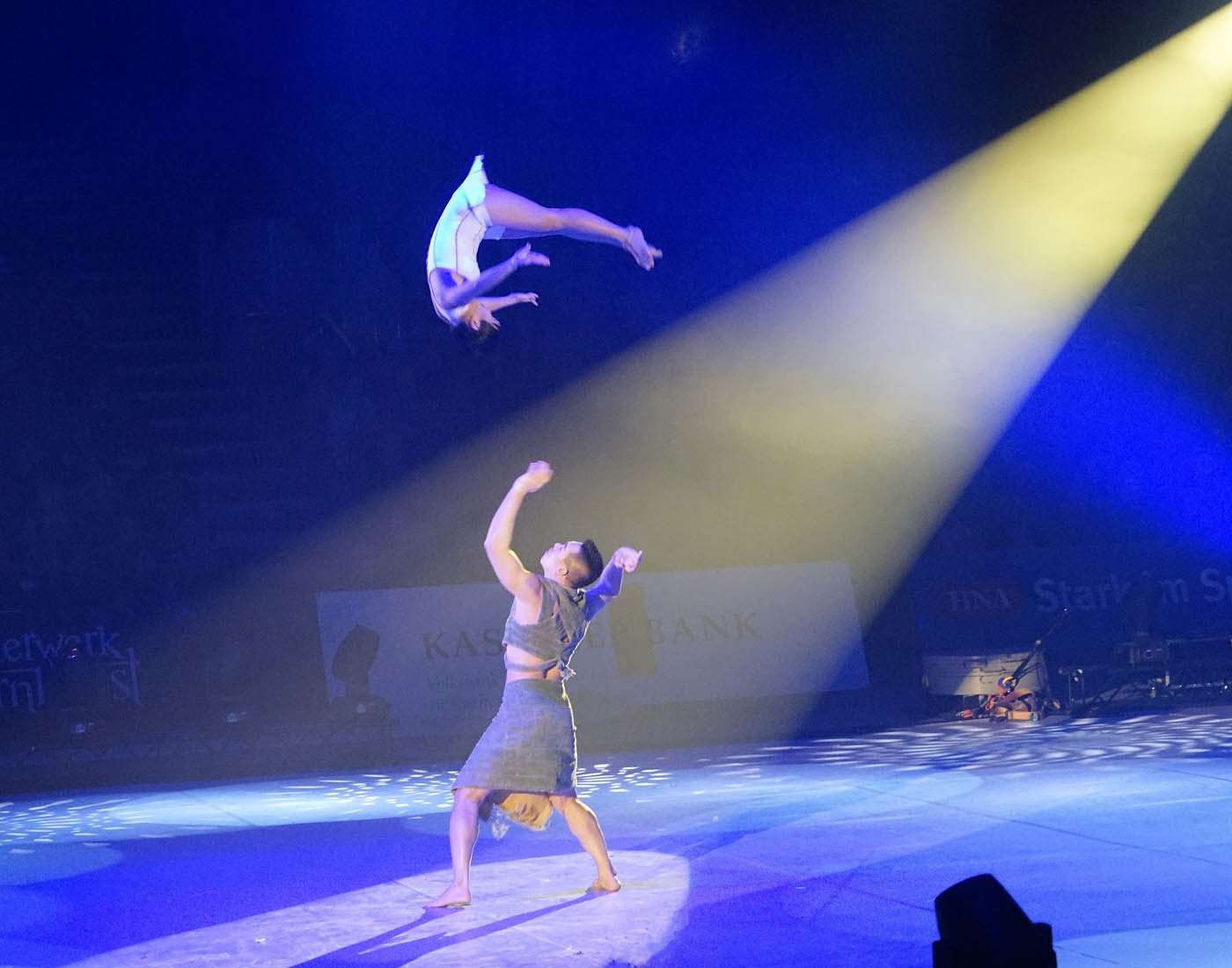 The word Acrobatic comes from the Greek word Acrobateo, meaning to rise or go forth. It is a competitive discipline of gymnastics in which gymnasts in pairs or groups perform routines consisting of acrobatic skills; dance and tumbling choreographed on music. They all are entered and assessed at a specific level or age group. In each partnership, the gymnasts of different heights, weights and abilities take part. They balance to complement each other in order to carry out the complex moves. Some commonly play the supporting and pitching roles, and are referred to as ‘bases’. They are then balanced with smaller height gymnasts who are referred to as 'tops'.

The main objective of the sport is to perform three types of routines, Balance, Dynamic and Combined. These routines involve holding static in certain formations, typically towers or pyramids, for specific time durations. It tests athlete’s strength and flexibility.

Acrobatics in one form or another has existed for millennia and its roots are found in the organized gymnastics found in the ancient Greece and Rome. The Bronze Age art of that time depicts the primitive forms of acrobatics, notably the bull-jumping that is attacking a bull found in ancient cultures with traditions of bull worship.

There are even some constant references to acrobatics in the Iliad and The Odyssey, both of Homer's epic literary works (Homer - One of the greatest and most influential authors of all time who lived in Ionia in the 8th – 9th Century BC). Similarly, China also had a tradition of acrobatics since the Han Dynasty, when acrobatics were part of the harvest festivals, and Wei Dynasty art that depicted the hand-balancing. Acrobatics have also been a part of entertainment in ancient Greece, where it was an important part of social events known as “Symposia”.

Acrobatics as upper-class entertainment continued as a keeper of European courts during the Middle Ages, when troupes of acrobats, tumblers and jugglers traveled from city to city to perform in early circuses. Handstands and other gymnastic skills were typical master strokes of the circus "strongman". Acrobatics and tumbling were an important skill during the Vaudeville era (Vaudeville is a theatrical genre of variety entertainment born in France at the end of the 19th century), as they were highly valued as entertainment.

At the beginning of the 20th century, two directions emerged in the development of acrobatics. The first was acrobatics on apparatus (trapeze, ropes, etc.), which remains a fixture of circus performances. The other was tumbling and Pyramid. Initially these were used only to show the efficiency of the human body, but later on they were developed into a competitive sport.

In Soviet times, packed stadiums saw massive gymnastics performances, with hundreds of acrobats working together to form complex figures including giant human pyramids, a practice that can still be seen at North Korea's Arirang Festival.

Acrobatics as a competitive discipline emerged from the Soviet Union, where the first competition rules were drawn up. The first Soviet national championships took place in 1939, but World War II interrupted the development of the discipline. The first international tournament named Sport Acrobatics took place in Warsaw, Poland in 1957, in which four Eastern-Bloc teams competed – Bulgaria, the German Democratic Republic, Poland and the Soviet Union.

A world governing body, the International Federation of Sports Acrobatics (IFSA), was established on 23 November, 1973 and initially represented 12 national governing bodies. The first World Championships were held in Moscow the following year with teams from Bulgaria, the Federal Republic of Germany, Great Britain, Hungary, Poland, the Soviet Union and the United States.

With their rich history of acrobatics and innovation, teams from China and Russia continue to dominate International competition in Acrobatic Gymnastics, while countries such as Great Britain and Belgium have improved dramatically.

Groups of males and females also have one or two people in the middle, like a second base that usually support the top while balancing at the base. The various partnerships seen in the competition conducted by Fédération Internationale de Gymnastique ("FIG") are -

The rules of the game, known as the Points Code, are governed by FIG. These rules can be changed every four years to correspond to the Olympic cycle, as in other disciplines of gymnastics.

Acrobatic Gymnastics is part of the World Games, and are also included in the European Games. Several national, state and regional competitions are also held in each country. Local and regional competitions often form the qualification stages that are required in order to compete in national championships. There is no requirement from the FIG for gymnasts to qualify through their national championships in order to compete at the international level, but the local governing bodies often select their national team based on the performance of the gymnasts in national competitions.

Acrobatic gymnastics events often attract audiences, because they are entertaining, exhilarating, and suspenseful due to perceived risky or daring moves.

Gold, silver, and bronze medals are usually awarded in the common formats; although in some competitions, a minimum score is required to qualify for medals.

The number of routines required at a competition depends on the level at which the gymnasts are competing. Each of the routine types has different importance, but all include tumbling and dance as elements. At lower age levels, only a single simpler routine is required. At the junior and senior levels, all three routines (techniques) mentioned below are required –

Balance (formerly known as Static) Routine - A balance routine requires certain poses or 'balances' that must be held stably for a specific period of time. These moves require strength, poise, elegance and flexibility. Gymnasts combine to form towers, or pyramids, with their tops balanced in a particular position over their bases. Traditionally, balancing routines were often performed to slow music, but not exclusively. The rest of the routine lasts about two minutes and thirty seconds.

Dynamic (formerly known as tempo) Routine - These routines demonstrate strength, power and grace through the performance of acrobatic moves that include phases of spring, flight, rotation and landing. This often involves a base, or bases, in partnership that propel the top through the air and through a series of somersaults or twists. The top is usually caught, or supported by their base in the landing. The dynamic routine lasts about two minutes.

Combined Routine - At the more senior levels of competition (12-18 through senior levels), a third routine is performed that combines both balance and dynamic moves with normal tumbling and dance (tumbling is not required from senior level athletes). This is usually done as a final routine, with duration of approximately 2 minutes and 30 seconds depending on the level of the competition.

The performance area is same as Rhythmic gymnastics. The total performance area is 12 x 12 meter rubber mat or a carpeted sprung floor with height of the hall (normally) 8 meter and Internationally 10 -12 meter. All the judges sit together so that they have the same line of vision and easily declare the winner.

The acrobatic gymnastics competitions are judged on a score out of 30.00. The following are the categories in which the athletes are scored.

Four artistic judges assess the artistic merits and faults in the routine performed.

Responsible for overseeing the panel’s activities and rules on any dispute.

Two difficulty judges assess the difficulty of the movements performed in the routine.

Four execution judges deduct points based on the technical imperfections in the execution of the routine.