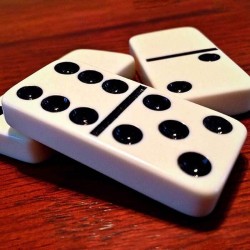 Dominoes is a tile-based game that is played with "domino" tiles. The tiles are rectangular divided into two square faces with a number marked over it. The ends of the tiles have a number of spots (pips, nips or dobs) marked on it or are blank. The back of all the tiles is similar as either they have any design or are left blank. The game is said to be originated from China by the Song dynasty. Sometimes, dominoes is played with a set of cards, regarded as a deck. These sets are lighter in weight, inexpensive and compact. The decks are prone to even a light breeze of air. Some domino tiles are aided with metal pin called as spinner or pivot in the mid-region.

Manufacturing of the Domino Tiles

The tiles are made from different material such as marbles, granite, wood and metal or even with ceramic clay, glass and crystal. Each set has 28 pieces with 6-6 to 0-0 markings. The more massive sets, on the other hand, have a series of up to 9-9 with 58 pieces or 12-12 sets with 91 pieces. In case of domino cards, each card in the deck has a width of 1.75 and a length of 3.5 inches and weighs approx. 1 gram. If a domino tile has two same numbers inked on the ends, it is regarded as a double but if it has different numbers marked on the ends, it’s called a single.

Types of Domino Tiles and Sets

Sino-European, one of the traditional domino sets, consisted of 28 tiles with a combination of spots between zero and six. The European style dominoes tiles were manufactured from bone, ivory and ebony with white or black painted pips. The modern domino tiles are made from various synthetic materials such as ABS, polystyrene plastics, Bakelite and phenolic resins. These materials are ideal due to their increased shelf life. The modified tiles have a smoother surface with distinct markings that wouldn’t shed off quickly. The new age playing decks have additional weight fitted to make them dense and durable.
*We crave for more modifications and accuracy. Help us do that with your valuable feedback. No responsibility is taken for the authentication of the data.