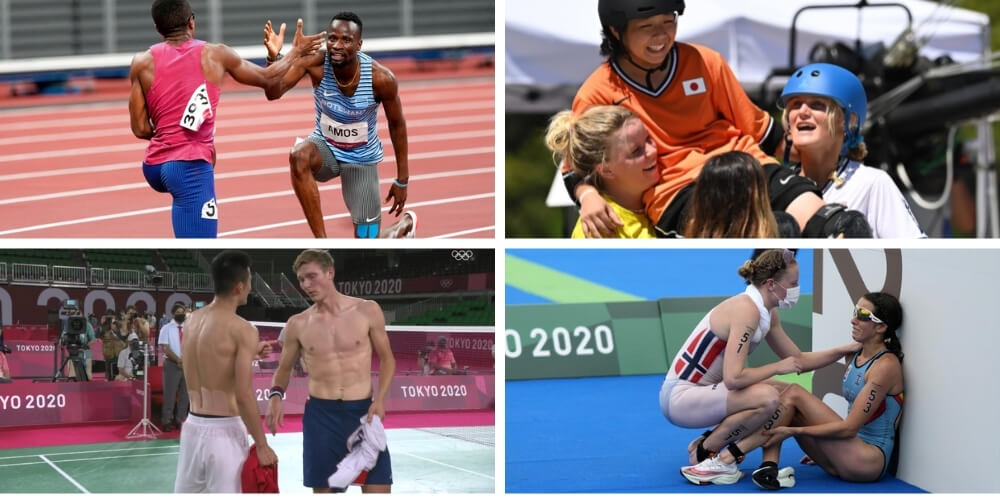 The Olympic Games have never lacked encouraging displays of courage, team spirit, and friendship among the participants.

But in a tough year that has caused physical and emotional damage to everyone, including athletes, every act of kindness and athletic prowess between Olympians competing at the highest level of their sport seems particularly meaningful.

From consoling and celebrating participants to sharing gold medals and words of encouragement, these are some of the truly touching moments of sportsmanship during this year's Olympics.

In the middle of the men's 800m semifinals, Nijel Amos of Botswana and Isaiah Jewett of the United States were entangled and fell to the ground, excluding them from the competition.

But instead of getting angry at each other, they helped each other to get up,  put their arms around each other, and jogged to the finish line together.

"Regardless of how mad you are, you have to be a hero at the end of the day. Because that’s what heroes do: They show their humanity through who they are and show they’re good people." - Jewett added.

Here is sportsmanship at its very finest. Isaiah Jewett and Nijel Amos finished their race together after an unfortunate trip. #Olympics #OlympicGames #TrackandField #Tokyo2020 pic.twitter.com/Ej4w4uue4Y

After the dramatic end of the Olympic high jump finals, it took Mutaz Barshim of Qatar and Gianmarco Tamberi of Italy only seconds to decide they would share the gold medal instead of jumping to determine the winner of the competition.

Both athletes were tied after completing the 2.37-meter jump but were unable to complete the 2.39-meter jump on three attempts each.

They could settle it by jumping or share the gold. While the Olympic official was explaining the rules, Barshim interrupted him and asked: "Can we have two golds?"

With a quick show of agreement and a handshake, they decided to share the gold.

"He is one of my best friends, not only on the track but outside the track. We work together. This is a dream come true. It is the true spirit, the sportsman spirit, and we are here delivering this message." - Barshim said.

A Triathlon Runner consoled her Competitor who finished Last

After finishing the tough women's triathlon in last place, about 15 minutes behind winner Flora Duffy from Bermuda, an exhausted Claire Michel from Belgium sat down on the ground after crossing the finish line and cried inconsolably.

Of the 54 athletes who started in the race, 20 were either lapped or dropped out.

When Norwegian Lotte Miller, who finished 24th, sat down to recover, she saw Michel crying and went straight to Michel to console her.

"You're a fucking fighter. This is Olympic spirit, and you've got it 100%." - Miller told Michel.

"This is Olympic spirit!"

When South African swimmer Tatjana Schoenmaker won the gold medal in the women's 200-meter breaststroke — breaking a world record in the process, and the same — she couldn’t believe it.

As the South African became emotional, fellow American team competitor Annie Lazor in the lane next to her came up to hug her excitedly.

Within a few seconds, another American swimmer, Lilly King, and Schoenmaker’s teammate, Kaylene Corbett, swam over to her and joined the two of them in a heartwarming and celebratory group hug in which all four women shared a hug in the water.

THIS IS WHAT THE OLYMPICS ARE ALL ABOUT ️#TokyoOlympics pic.twitter.com/ucgIh3P9zA

A Badminton Player encouraged her opponent who previously defeated her

When Tai Tzu-ying, the world's number one badminton player, lost her chance to win the gold medal in a heartbreaking defeat, she was comforted by an opponent she had defeated the day before.

In her Instagram post, Taiwanese Tai wrote that after receiving silver at the medal ceremony, Indian player PV Sindhu ran up to her, hugged her, held her face, and said words of support and encouragement to her.

Just the day before, Tai defeated Sindhu in the semifinals, shattering her hopes of winning the gold medal.

Tai wrote that Sindhu took her in her arms and said that she knew all about disappointment.

"That sincere encouragement made me burst out in tears... I was really sad because I tried so hard,” Tai said.

“She held me in her arms and said she knew it all. That sincere encouragement made me cry” - Tai Tzu-Ying on PV Sindhu.

What a champion #PVSindhu is both on and off the court.

A special player, A special human being ️ #Tokyo2020 pic.twitter.com/Qbu4bePNfM

A Runner falls in a 1,500-meter race but wins the medal

Dutch player Sifan Hassan has just entered the final lap of her 1500m heat, where she was the medal favorite. Suddenly, the runner in front of her fell and pulled her down.

There were 11 runners in front of her and a huge gap to make up for, and Hassan got up and started reeling them in. In the final, she immediately overtook the five fastest runners in the world to win the race.

In the final, she won bronze - a medal that she would not have had if she had not managed to accomplish the almost impossible in the qualifying race. She also won gold medals in 5000 meters and 10000 meters.

Hassan said: "Believe me, it was horrible, but sometimes I think bad things happen for good. When I fell down, I said to myself, OK, life doesn't always go the way that you want. After that, I felt like somebody who drank 20 cups of coffee. I couldn't calm myself down."

But the two competitors hugged warmly after the match and even exchanged shirts.

Axelsen said: "I respect Chen Long a lot. He came over to my side of the court and told me I deserved it and that my performance here has been great. I asked him if we could change shirts, and we did."

I LOVE THIS MOMENT! What a fabulous display of sportsmanship and camaraderie. This is what the #Olympics is all about. ️ #DEN’s Viktor Axelsen defeated #CHN’s Chen Long and they met after the game, greeted each other, hugged, and exchanged shirts. #Tokyo2020 #Badminton pic.twitter.com/ImpC6QhUz5

A Tunisian Swimmer shocks the Swimming World with 0.16 seconds

An 18-year-old Tunisian managed to pull off a surprise upset in the 400-meter freestyle swimming event, winning the fifth gold medal ever for his country.

Ahmed Hafnaoui erupted in jubilation when he realized he won in the extremely tight race, pumping his fists and placing both hands on his brow as he took in the victory.

He looked genuinely shocked by the result: "I just can't accept that — it is too incredible."

Hafnaoui came into the race with the slowest qualifying time of the eight swimmers — but he touched the wall first, beating out Australia's Jack McLoughlin by just 0.16 seconds. Kieran Smith from the U.S. took bronze, about a half-second behind the winner.

When NBC asked Hafnaoui how he holds the lead, he simply said: "I don't know, I just put my hand in the water, that's it. It's a dream that became true."

This will be the only video I will talk about until the next Olympics. Thanks for making me cry Ahmed Hafnaoui, so damn proud of you. #Olympics #Swimming pic.twitter.com/NeaLT0ttcT

After 15-year-old Japanese skateboarder Misugu Okamoto fell on her final run, and her fellow competitors lifted her up with their shoulders.

Okamoto made it to the final but missed an important part of her landing. She was the last to compete in the final but suffered heartache when she fell off her board after trying an indie flip in the final run.

She slipped off her board and dropped to fourth in the rankings, which means Sky Brown from Great Britain took the bronze medal.

As Okamoto lay on the ground in tears, her fellow finalists, whose average age was 17, rushed to console her, lifted her onto their shoulders, and clapping her out of the bowl.

It was remarkable to see the incredible display of sporting spirit, or, shall we say, sportswomen's spirit, as her rivals lifted Okamoto on their shoulders.

Moments after 15-year-old Misugu Okamoto fell and missed out on a bronze medal, her competitors raised her on their shoulders and cheered her on. This is what sports are all about ️ pic.twitter.com/avbLDY0p4F

A four-time Olympic medalist, Lilly King of the USA team, was expected to win the women's 100m breaststroke and defend her gold medal.

But unexpectedly, she lost to a 17-year-old teammate, Lydia Jacoby, who was the first Alaskan to compete in the Olympics. The 24-year-old Lilly won the bronze medal.

Despite Lilly's personal disappointment, she talked up the young swimmer after the swim: "We love to keep that gold in the USA family, so this kid just had the swim of her life, and I am so proud to be her teammate."

"We love to keep that gold in the USA family, so this kid just had the swim of her life and I am so proud to be her teammate."

Lydia Jacoby and @_king_lil react to their gold and bronze medals in the women's 100m breaststroke. #TokyoOlympics pic.twitter.com/wIEXtFLkMq

These were some of the most memorable moments of the Tokyo Olympics.